We will send an invite after you submit!
In memory of Margareta (Maggie) Helena Ihren Dean
Heart

Maggie (her preferred name) was born in Stockholm, Sweden, the fourth child of Lillian and Roland Ihren. Brother Charlie and sisters Eva and Christina had an active little sister. She hit the ground running and never stopped.

"Meta," as she was known by her family, had many and varied interests. A dedicated student and athlete she was constantly busy and "on the go." She was a member of the Swedish National Basketball Program as a teenager and eventually became the starting point guard on the National Women's Basketball Team representing Sweden in countries as far away as Taiwan and throughout Europe. "Maggan," as her basketball teammates and friends called her, won a Swedish Club Championship with Solna Basketball Klubb in the 1980's. Knee injuries cut her basketball career short.

A year long around the world trip with her best friend Asa Hammar was a break from school and sports. Maggie loved to travel and experience new lands and meet new people. She enrolled in Stockholm University where she graduated with a degree in Child Development. Maggie became a school counsellor for troubled high school age students.

In her early 30s she renewed a relationship with Brad Dean who had coached her 10 years earlier. Margareta Helena Ihren Dean and Brad Dean were married on May 30th, 1998 in Stockholm. Daughter Michaella would shortly follow and two years later son Christopher joined the family. Both children were born in Sweden. Michaella in Pitea and Chris in Stockholm. Maggie dedicated her time to her children's formidable years. The family moved to Germany and while raising the children she acquired a master's degree from Lund University.

During the first 5 years of marriage Brad's coaching career took the family from Sweden to Belgium and Germany. With young children ready to start school a home base was desired and it was decided the family would buy a home and settle in Sint-Lievens Houtem, Belgium.

As the children grew older Maggie wanted to return to the workforce. Her first job in Belgium was as a Swedish teacher in a Flemish adult education school in Aalst, Belgium. In order to teach this class she had to speak Dutch fluently and took intense courses.

Her Swedish courses would not just be in the classroom. She took her students on field trips to Ikea, had Swedish picnics and even invited classes to her home for a traditional Swedish Christmas. It was not only language she was teaching but also Swedish culture. All this combined with dedication and commitment to her students along with natural charisma made her class one of the school's most popular.

After 2 years of teaching she decided to change careers. Maggie always had a desire to run a coffee house, it was one of her dreams. Once it was decided she was going to be a coffee house CEO, she did like she did everything in her life, went after it 100%. A high end coffee machine was purchased and put in her house. She began taking barista courses during the day while practicing afterwards at home on her own machine. An intense period of learning the coffee business was followed by opening her own coffee house, Dean Coffee, in Wetteren, Belgium. It became the most popular gathering place in town. Two years of building up the coffee house took its toll on Maggie, now in her 40s, she decided to sell the business. Instead, she began giving barista classes during the week at a friend's who owned a coffee machine distributing warehouse. She did this while also managing a mobile coffee bar. She named the new company Maggie Loves Beans. Maggie began taking her barista classes on ambitious trips to coffee countries. She traveled herself or organized and led groups of more than 10 students to Ethiopia (twice), Brazil, Guatemala, Costa Rica, and Puerto Rico. While giving barista classes she expanded her expertise and began teaching courses in coffee roasting, cupping and finally Latte Art. She entered the Belgium national latte art championships and came in 2nd place twice. Never previously having explored her artistic abilities she opened a door and discovered a side of her that she never knew existed.

The waiting list for her barista classes and later latte art courses grew. While doing this she was also running a mobile coffee bar. She would do events throughout Belgium. Maggie was hired by Microsoft and Whirlpool to set up her coffee bar during large expos in Brussels. She was in high demand because her coffee stand would draw crowds to the company's section. This was because she was always a perfectionist with all she did. The coffee she served was of top quality. This combined with her people skills and beauty put her in high demand. In addition, she set up her coffee stand at her husband's home games in Aalst, Belgium becoming very popular with the avid Okapi (basketball club) fans.

In 2016, after 13 years in Belgium, Michaella and Chris were ready to experience high school in the states and the family moved to Irvine, California. Maggie started her mobile coffee business from scratch in a new country. She began working in various areas in Orange County, CA. After a few years she began to experiment and expand her artistic side. She started selling her drawings and prints at her coffee events. Maggie saw her pictures were popular and eventually decided to move on from coffee and focus on her art.

Maggie and Brad moved to the high desert in California buying a home in 29 Palms. Maggie loved Joshua Tree National Park and the desert. Her new surroundings motivated her to draw and expand her growing art gallery. With more time for herself she began to draw more and more pictures, making prints and opening stands exclusively selling her art. She went up and down the high desert and found stores very interested in her artwork. Soon she had her drawings in more than a dozen shops and art galleries and the demand was growing.

Maggie had many interests throughout her life. She loved interacting with people and was a trusted friend to many. No matter where her travels took her she remained very proud of her Swedish roots. She was a warm and giving person. Living in the states was at times difficult because she missed her home country and most of all her family. But more than anything else she was completely dedicated to her children. Whatever the demands of her busy schedule she would drop everything when Michaella or Christopher called. They were always her first priority. The love for her children knew no bounds.

Maggie was beautiful and the more you knew her the more you realized how genuine she was. Her last week she was able to see both her children multiple times and was looking and feeling great. She lived her life to the max, never wasted a second.

Her passing came far too early. The overwhelming outpouring of love from all those who's lives she touched was of great comfort to her family. 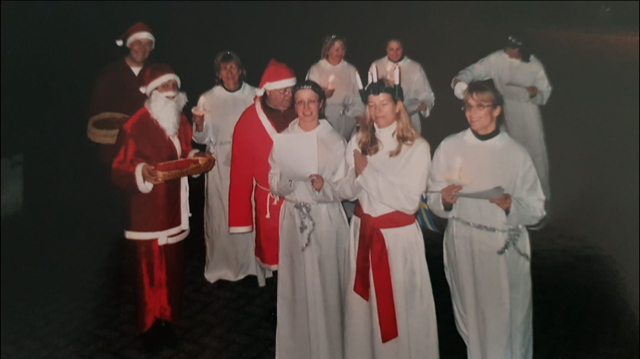 As Swedish language learning students, Maggie learned us singing Lucia songs which we had to perform live at the local …

Maggie is truly one of the most inspiring persons I have met in my Life, teached my husband and me everything about cof…
See all memories

Created with love by Zoe Dean.